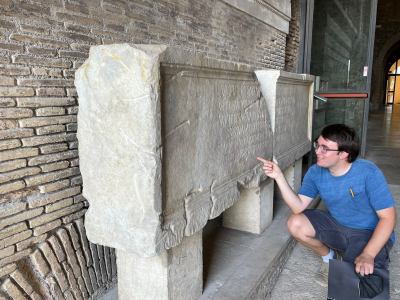 Ben examining an epitaphic inscription from the Capitoline museum.

Thanks to the summer funding provided by this department research travel award, I was able to attend and
complete the British School at Rome’s postgraduate course in Roman epigraphy, held in person in Rome,
Italy. The course was conducted from July 11th to July 20th, under the direction of Dr. Abigail Graham.
The course provided an excellent introduction to the field of Roman epigraphy by taking us students on a
series of educational trips throughout Rome, including a day trip to Ostia Antica. Other destinations
included the Vatican’s Galleria Lapidaria, the Roman forum and Capitoline museum (included as photo
1), and the Via Appia (photos 2 and 3, from the tomb of Cecilia Metella). These trips were supplemented
by nightly lectures at the British School at Rome, where we were comfortably situated, as well as a visit
to La Sapienza, the home of the archive used for the sixth volume of Corpus Inscriptionum Latinarum
(CIL VI), a volume of the most comprehensive corpus of Latin inscriptions. In order to successfully
complete the course, every student had to prepare a final presentation on a topic of their choice. My final
project focused on the development of the orthography of early Roman Republican epigraphy, starting
with the inscriptions found on the tombs of the Scipio family (3rd-2nd centuries BCE) and progressing to
the inscription of C. Duillius, the dating of which is uncertain: Duillius was consul in 260 BCE, but
certain non-archaic word forms, spellings, and letter forms within the inscription indicate that it was either
an actual 3rd-century inscription recarved in a later period (usually considered to be either under the rule
of Augustus or Claudius), or was created in toto under the auspices of one of those emperors.
This course was an extremely valuable introduction to Latin epigraphy, not least because we were able to
see inscriptions either in situ, or at least in person, which provides a much more in-depth learning
experience than studying inscriptions from transcriptions. Additionally, the course covered the basic
transcription techniques of rubbings (which involves placing tissue paper and carbon paper atop the
inscription, then rubbing the carbon paper into the tissue paper, creating a copy of the inscription), and
squeezes (no squeezing involved! Thick paper is placed over the inscription and then lightly beaten with a
brush or other implement, similarly creating a copy of the inscription). This course helped me gain a
better understanding of an important subfield in the discipline of Classical Studies, and this understanding
will serve me well in my future studies at Duke!