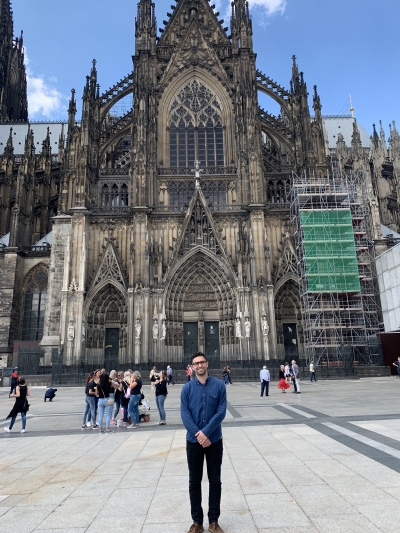 This summer I spent six weeks in Cologne, Germany participating in the German for Classics Students summer program. The course, held at the University of Cologne, is designed for graduate students of Classics who wish to acquire a more active knowledge of German for their studies. I decided to apply for the program because I hope to read the works of the many prominent German philosophers and scholars who have written on Plato, the intended subject of my dissertation. Many of these works are not translated into English and are written in old-fashioned, difficult German. I knew that I would need to reach a much higher level of competency in order to be able to read their works with the rapidity required to survey the most important interpretations of Plato from the modern period. 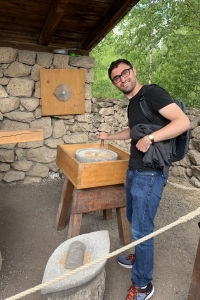 The program is structured so that students of Classics learn German from teachers who know the specific needs of those in our discipline. Our primary instructor held a PhD in Classics, but had also begun teaching refugees German, so he was able to combine his knowledge of antiquity with the more practical pedagogical demands of foreign language instruction. Every Monday through Wednesday we would meet with him to deepen our understanding of the language through a variety of exercises, including ones which focused on speaking ability and aural comprehension. On Thursday and Friday, professors and students of the university would come to lead activities which were more specifically aimed at both reading scholarship and presenting our own scholarly ideas in German. The course culminated in a conference in which former students of the program returned and delivered papers and the current students had the option of delivering a response. I chose to do so, and it was exhilarating and reward to give a five-minute response in German before a crowd of spectators.

This excellent coursework was complemented by frequent visits to Roman archaeological sites, the abundance of which is due to Cologne’s being a colony of the Roman empire (the name Cologne stems from the Latin word Colonia). The trips also included visits which focused on other parts of German history, down to the present day, so we could better understand the country in which we were studying. In our free time we had the opportunity to practice our German by exploring the wonderful city of Cologne and visiting other parts of Germany. The fifteen students selected for the program, who came from all around the world, became a tight-knit group – I am sure I will stay in touch with them for a long time. My time in Germany was very rich and I thank the Department of Classical Studies for helping facilitate my trip.