Prof. Alicia Jiménez will present a virtual talk at Exeter University, UK, on the recent research finds at the camps near Numantia (Renieblas, Spain) on Feb. 11, 2021 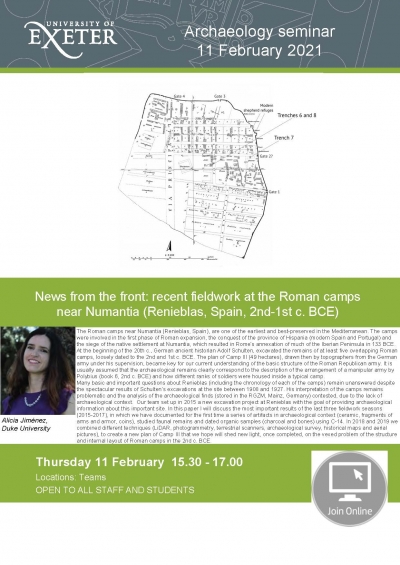 The Roman camps near Numantia (Renieblas, Spain), are one of the earliest and best-preserved in the Mediterranean. The camps were involved in the first phase of Roman expansion, the conquest of the province of Hispania (modern Spain and Portugal) and the siege of the native settlement at Numantia, which resulted in Rome’s annexation of much of the Iberian Peninsula in 133 BCE. At the beginning of the 20th c., German ancient historian Adolf Schulten, excavated the remains of at least five overlapping Roman camps, loosely dated to the 2nd and 1st c. BCE. The plan of Camp III (49 hectares), drawn then by topographers from the German army under his supervision, became key for our current understanding of the basic structure of the Roman Republican army. It is usually assumed that the archaeological remains clearly correspond to the description of the arrangement of a manipular army by Polybius (book 6, 2nd c. BCE) and how different ranks of soldiers were housed inside a typical camp.

Many basic and important questions about Renieblas (including the chronology of each of the camps) remain unanswered despite the spectacular results of Schulten’s excavations at the site between 1908 and 1927. His interpretation of the camps remains problematic and the analysis of the archaeological finds (stored in the RGZM, Mainz, Germany) contested, due to the lack of archaeological context. Our team set up in 2015 a new excavation project at Renieblas with the goal of providing archaeological information about this important site. In this paper I will discuss the most important results of the last three fieldwork seasons (2015-2017), in which we have documented for the first time a series of artifacts in archaeological context (ceramic, fragments of arms and armor, coins), studied faunal remains and dated organic samples (charcoal and bones) using C-14. In 2018 and 2019 we combined different techniques (LiDAR, photogrammetry, terrestrial scanners, archaeological survey, historical maps and aerial pictures), to create a new plan of Camp III that we hope will shed new light, once completed, on the vexed problem of the structure and internal layout of Roman camps in the 2nd c. BCE.