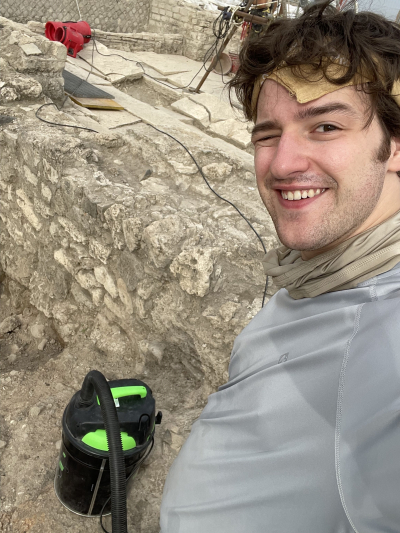 I am grateful for the departmental funding that enabled me to participate in the Vulci 3000 Archaeological project, led by Dr. Maurizio Forte, for the first time. As a budding Etruscologist, I was excited to continue my studies of Etruscan civilization at such an important site. The tombs of Vulci’s wealthiest citizens yielded some of antiquity’s most heralded painted vases and other artifacts in centuries past, yet the Vulci 3000 project is the first scientific stratigraphical excavation of the city itself. In this season’s fieldwork I helped the team to uncover pipes and cisterns to better understand the water management systems used at the site in both Etruscan and Roman phases of occupation.

While fieldwork at this high-caliber site would have been invaluable merely due to its historical significance, I was especially excited to learn about the advanced documentation strategies employed at Vulci. Archaeology is an inherently destructive science: once one layer has been recorded and its artifacts identified, it is obliterated to uncover the layer below. At Vulci, our workflow involved making a 3D model and GIS layer for every single stratigraphical layer we uncovered. This sometimes painstaking process, which began with pickaxes and trowels and ended with tablet computers and photogrammetry technology (and lots of vacuuming dirt off the ground in between) is revolutionary because it helps ameliorate archaeology’s destructiveness. In traditional archaeology, only the excavation team itself would have the privilege of interpreting their site’s layers; this new workflow at Vulci allows others, perhaps even those in the far-off future, to check our work! It was truly a pleasure to work at the cutting edge of archaeology, and  to work with such an excellent multi-national team. I would like to thank the department and its generous donors for allowing me to take this important first step in my PhD archaeological fieldwork.