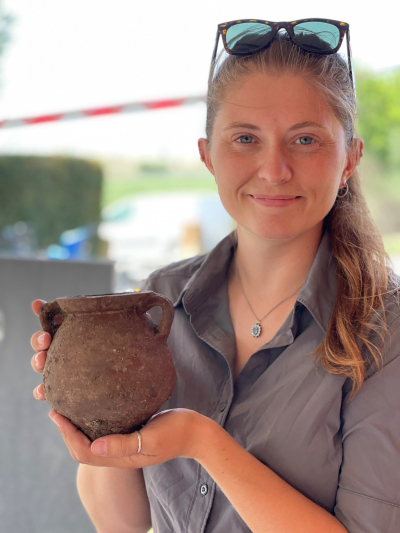 Dani with an intact vessel she uncovered from Vulci

I am indebted to the department’s generous funding which allowed me to join the Vulci 3000 Archaeological Project this summer with Professor Maurizio Forte. Never having been to Vulci before, this was an invaluable experience in adding to my professional skills in the field. Every project and site are run differently based on the research questions and methodologies in use, so having the chance to join the Vulci team and learn more about the research project itself as well as the unique combination of digital tools at the site was an unparalleled opportunity.

The project is focused on better fleshing out the daily life of urban Etruria – an area of Etruscan culture that is little understood compared to the rich and enigmatic tomb assemblages – and seeks to elucidate how the city was altered when it came under Roman control. Thus, this past summer, the project continued to excavate an area of the later Roman Forum in an attempt to uncover the transitional layers that took the city from an Etruscan to a Roman city. Vulci 3000 is well known for its work in being a leader in exploring the boundaries of Etruscan urban life, and so having the chance to be a part of such innovative and groundbreaking work was truly an honor. Furthermore, learning more about the digital processes that are utilized at Vulci was particularly vital. The entire site is recorded, layer by layer, with 3D photogrammetry and a full 3D replica of the entire excavation has been continuously made since 2016. The implications of this work are immense as it essentially makes accessible in extremely high detail the entire archaeological process of the excavation. Traditionally, once something is excavated it is destroyed and the data only existing in an archaeologist’s notes. This technology is, therefore, decisive in helping to mitigate the inherently destructive nature of archaeological fieldwork. What is more, any individual

or institution with access to an Oculus VR headset can have access to this data and learn directly from the field without having to travel all the way there. For students with physical disabilities who are interested in archaeology this is an incredible leap forward in terms of accessibility, as the field can often be an impossibility for them. In the classroom more generally, this technology has incredible potential of augmenting how we teach archaeology and archaeological field practices – the latter typically being something one must learn on the fly and in the field itself. As public perceptions of and education about the field are strong interests of mine beyond my more focused research interests, the skills and knowledge I acquired at Vulci will be crucial to how I continue to grow and develop as a professional archaeologist during and beyond the PhD.