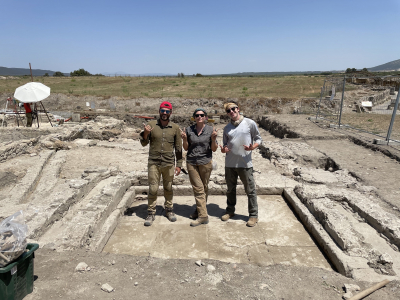 Over the course of the summer, the department’s generous funding allowed me to return for another season to the Vulci 3000 project so that I could attain experience as a Trench Supervisor. This experience was enlightening in many aspects and allowed me to gain a better appreciation for the higher-level decision making processes that occur in archaeological fieldwork and the minute-by-minute interpretative decisions that must be made by supervisors and directors. The Vulci 3000 project is an important source of data within the field, and it was certainly thanks to the support of the department and its generous donors that I was able to attend the project for another year. I have previously held other staff and volunteer positions in the field and so this summer was particularly important for my career as being my first experience in the position of a supervisor. Learning directly from the field directors and other supervisors about how to lead others and interpret things on the fly in the field was invaluable to my continued growth as an archaeologist.

Vulci itself is also a rich site with much to teach us about how populations in antiquity experienced socio-political and cultural change. Though my own research interests lie in Roman Britain and Germany, the transitionary period at Vulci when it went from an Etruscan to a Roman city is an exciting topic and could help us answer questions in other parts of the Roman Empire. As such, the questions surrounding civic infrastructure at Vulci, especially water features, are important queries to be making and they have implications across the entire Roman world. How such features were retained, retired, or revitalized in the landscapes of ancient cities subjected to conquest are critical questions when looking at stasis and change. The myriad features at Vulci – cisterns, wells, water pipes and channels – provide tantalizing examples of how civic infrastructure was woven within the fabric of the city at every stage.

The levels of stratigraphy at Vulci are telling of fascinating periods of change and integration as the Roman city was built atop and into the Etruscan one, making use of many of the same features and structures. The life of the large cistern in Area A for instance – which we completed excavation of this summer – is an evocative symbol of change in the city as we have a very good picture of its construction, use, abandonment, and later its final closure. The lifecycle of features such as cisterns can hold an incredible amount of data about the life of the city it served with finds indicative of votive use, practical water storage use, and later its use as a dump site. It is for these reasons that some of our finds this summer were especially exciting such as a new cistern, another well, and a new building with rather fascinating hollow walls structures that could have also been constructed for water-containing purposes.

Relatedly, I was also able to publish another article with the magazine Art & Object on the water-based research happening at Vulci this summer. The generous funding of the department and its donors was also sufficient to allow me to travel to Pompeii to write a second article on the excavation being conducted there by Cornell University and the University of Reading, for which I was the staff photographer in 2019. Both of these articles are invaluable opportunities to reach a wider audience on the importance of archaeological fieldwork, but they are also aiding me in widening my own professional scope towards potential careers in writing and publishing.

Overall, my summer experience in the field was instructive on multiple fronts and has certainly aided in my continued professional growth. I am deeply indebted and grateful to the department and its donors for the chance to gain these experiences and continue towards my future goals.