Prof. Jiménez obtains new data in the field to create a digital plan of the Roman camps near Numantia (Renieblas, Spain) 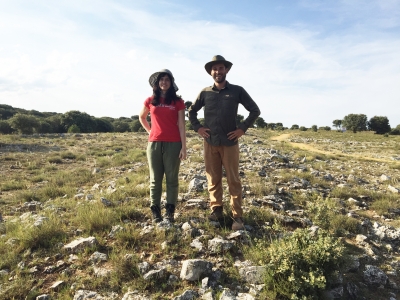 The project combined traditional archaeological methodologies, such as the analysis of historic maps and photographs, with the use of Geographic Information Systems, photogrammetry and a LiDAR-based map generated by our team using drones. During the 2019 fieldwork season at the site, we took advantage of all that information to survey target areas on the ground, to create new digital models with terrestrial scanners of elusive areas and to study in the field with portable devices equipped with GIS software certain Roman structures visible from the sky.

The analysis of these data-set has allowed us to confirm or discard a series of hypothesis about the camps. In addition, the point cloud obtained by our terrestrial scanners has revealed new structures under the tree canopy that will shed new light on our interpretations of the internal layout of one of the oldest and best-preserved Roman camps in the Mediterranean. Up to now the only plan of all the camps available was the one drawn for A. Schulten by German topographers at the beginning of the 20th c. The plan of Renieblas Camp III, in particular, has been repeatedly reproduced in scholarly publications since the 1930s to illustrate the typical Roman camp of the 2nd c. BCE as described in Polybius’ book 6.