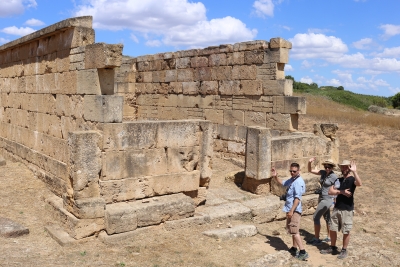 This summer was a very productive one for me. In May, I visited the British Museum in London, which had a fantastic exhibition on Sicily, which had an amazing cross-section of material from prehistory to the Norman conquest. This exhibition served as the perfect preface to a six-week field season at Morgantina in central Sicily (http://morgantina.org). The first three weeks of June, I worked as an excavator for the Contrada Agnese Project (http://themagazzino.org/) as the team continued excavating a large Hellenistic house from the 3rd century BC. At the end of June, I was joined by Edward Triplett, a CLIR postdoc at Duke, and Emma Buckingham, a PhD Student from UNC. Our team collected geospatial data from Cittadella, the archaic settlement of Morgantina, using pole and kite photography to create 3D models of the exposed architecture uncovered in earlier excavations. Additionally,  we created 3D models of the pottery from stratified contexts. One of our goals during the year is to put the context pottery into a 3D interactive environment, so that we can study pottery assemblages in the same digital space as the 3D model of the trench in which they were found. Upon leaving Sicily, I traveled to Athens where I had a study permit to view, draw, and photograph inscribed tombstones in storage in the Epigraphic Museum. While in Athens, I was able to do research in the Blegen Library at the American School of Classical Studies in Athens. Additionally, I was able to assist Bruce Hartzler, the digital archivist of the Agora Excavation in Athens as he tries to transition all of the digital excavation plans into an online GIS platform. Lastly, I was able to meet with Leda Costaki, archivist at the American School of Classical studies, and Annita Theocharaki, an archaeologist who specializes in the topography of Athens. Leda and Annita are attempting to put together a complete plan of Athens, which currently does not exist. As project manager of the Digital Athens Project (http://www.dukewired.org/projects/digital-athens/), I met with them to discuss collaboration during the year of our two groups, since we are working towards the same goal. All of this travel was made possible by the Classical Studies Travel Fellowship and the generosity of the Teasley Family Classical Antiquities Endowment Fund.